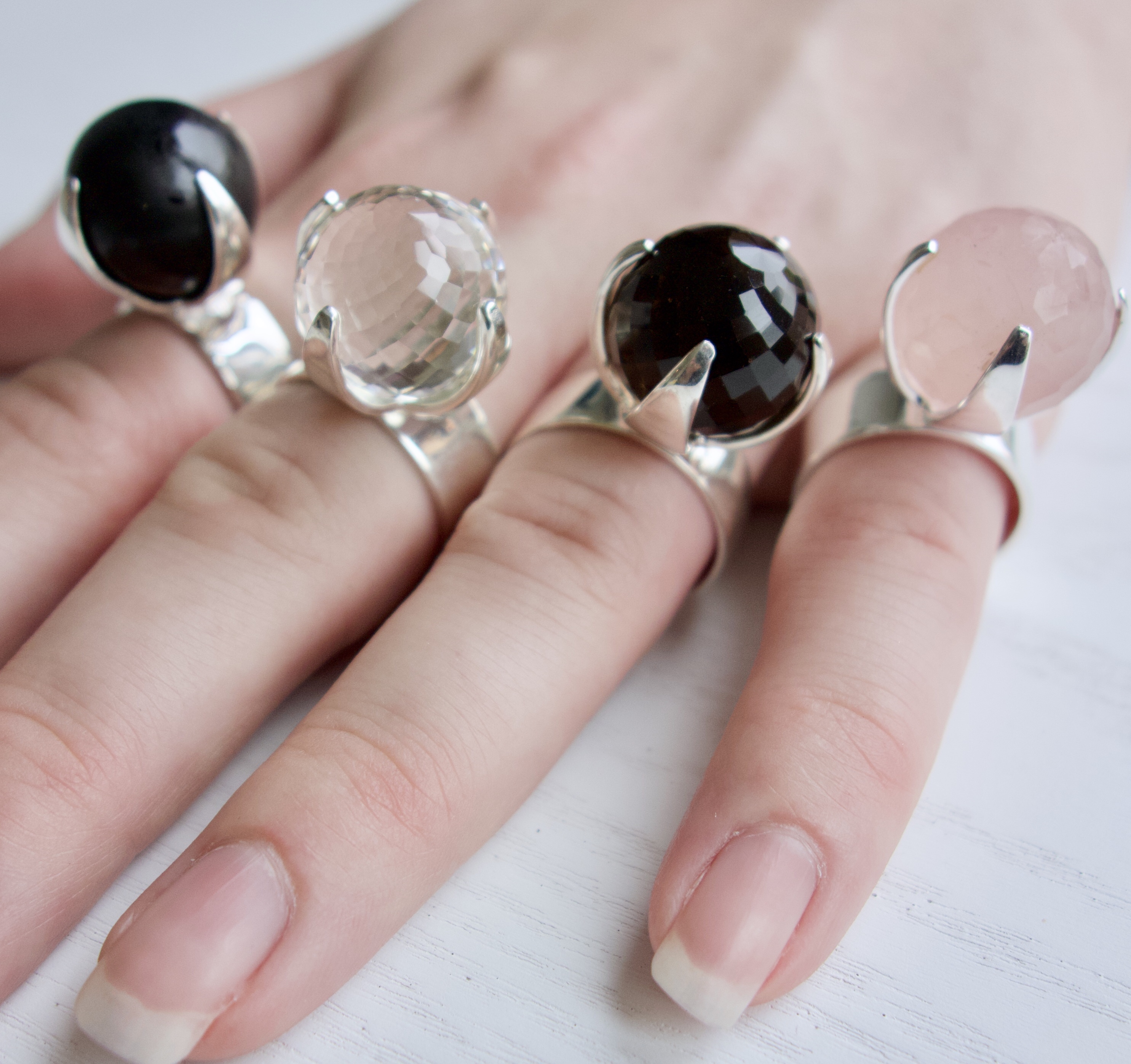 Since ancient times, mankind has believed in the inner power of stones and their capability to heal illnesses and take away evil spirits. The oldest crystal amulet is about 20,000 years old and the oldest jewelry found is dated back 100.000 years!

Regardless you believe in the power of stones or not, they are beautiful, especially in a piece of jewelry.

We use precious stones like onyx, rose quartz, quartz, Tiger's Eye and smokey quartz in our jewellery. These stones used to be called semi-precious stones which is a commercial term invented by the industry to separate diamonds, rubies, emeralds, and sapphires form the rest. Luckily the term semi-precious is used less today and these stones could sometimes have a higher value than the "precious", there is a high demand on the market. There is no such categorisations between the precious and semi-precious and as well gemologists and geologists agree that all the stones should have the common name precious stones. see Wikipedia. Sometimes the value of the semi-precious stone is higher than a precious stone due to dispersion, gloss and refractive index. All stones are different, even within the same type and no one is the same. Regardless of what name being used, all stones are minerals and they're all beautiful!

We want to emphasise that we only use natural stones with their natural colour, and not dyed stones as their color can fade by time. Natural stones vary in their colour, especially rose quartz, smokey quartz and labradorite. We think this is so beautiful that they all are different.

Exists in various pink colors, so all stones are different. Our rose quartz is polished to be shiny and cut with facets which allows you to see all the different nuances and the inner structure. Rose quartz have inner cracks and those stone we love the most as they reflect the light very beautifully.

Rose quartz belongs to the quartz family and exists in bigger amounts in Brazil, Madagascar, Thailand, and the US. Below natural rose quartz.

Rose quartz - the meaning of

The rose quartz is the stone for love and the energy is positive and motherly. The stone gives happiness in relations and also gives inner peace, the perfect gift!

The stone is often massive, mat and often with some cracks, don’t worry, this is totally natural.

Onyx also belongs to the quartz family och consist of the mineral chalcedony. The stone comes in generally from South America bat exist also in India.

Onyx means claw or nail in Greek, that's why we named CLAW family as the stone is protected and embraced by a claw. According to the legend, the onyx was created when Amor cut Venus nails while she was sleeping. The nails were spread out on the ground and as no part from a goddess can die, the nails were transformed to onyx.

Onyx is mostly used high polished in jewelry, but we also use it mat polished so it looks like licorice.

Read more about the silver ring CLAW with a big Onyx here.

Onyx - the meaning of

The onyx stabilizes and protects you from negative energy, it also gives you the strength to handle, stress, grief, and fear. The onyx sets the balance between the male and female. The onyx is also the stone for good health and is connected to intuition and instinct.

Smokey quartz exists in many places, but in big amounts especially in Brazil and the alps.

The Smokey quartz exists in different tones of light brown to a very dark brown tone, almost black, is called Morion. It’s a beautiful stone and we polish the stones to be shiny and cut with facets which allow you to see all the different nuances and the inner structure.

Smokey quartz - the meaning of

A stone for happiness for life and creativity! Also, good against depressions and gives the clarity and happiness of your thoughts.

The quartz exists almost everywhere in the world, but especially in Brazil in big quantities. You can also find this stone in the north part of Sweden. The crystal quartz has no color and it is a completely transparent version of the quartz family. The name comes from the greek Krystallos and means ice as it was found at high altitudes in the Alps.

We use it polished to be shiny and cut with facets and it sparkles beautifully with light and looks like ice. Below natural crystal quartz, unpolished. 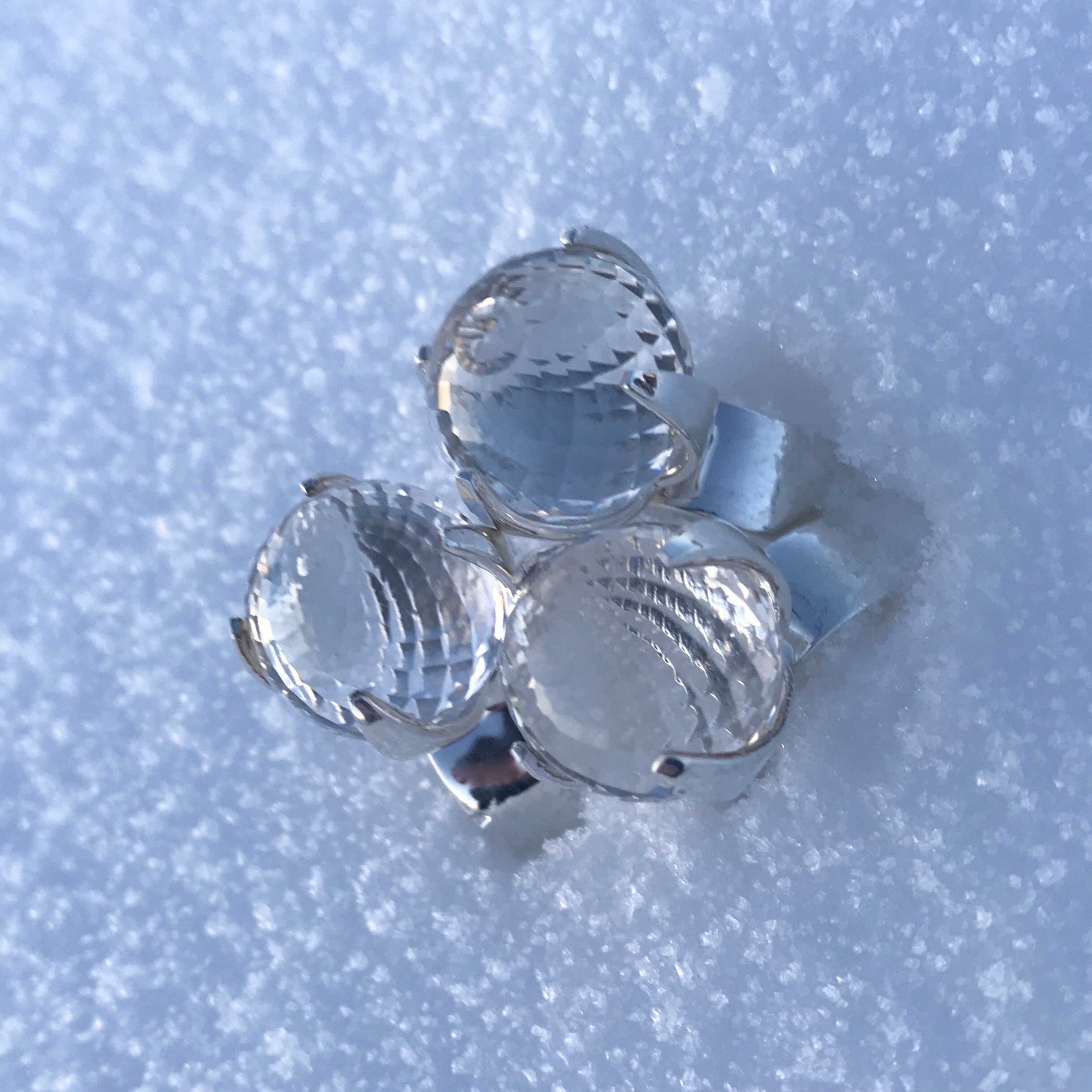 Crystal quartz - the meaning of

For positive and balanced thoughts, gives energy and will help you with good night sleep.

Labradorite is a feldspar mineral and comes mainly from Labrador, in Canada. There is also a version from Finland but smaller quantities from other parts from the world have also been reported. Labradorite exists in various colors; blue, turquoise, green, grey, yellow to brown. We use the blue- turquoise stone.

Read more about the ring US, with labradorite in various blue color tones, extra beautiful in the sun!

Labradorite - the meaning of

Labradorite is a healing stone and perfects to have through change. The stone also vitalizes both fantasy and creativity, you get lots of ideas!.

It protects you from negative energies. There are beliefs that the stone gives strength and energy but its power comes from within yourself, exactly like the stone looks like have an inner light. Trust yourself!

It's said that the Lore of the Inuit people thought the Labradorite fell from the frozen fire of Aurora Borealis.

Read more about the big silver ring US with Tiger's eye with various sizes of stones and shades of brown.

Tiger eye - the meaning of

Tiger's eye is believed to give your energy going when you feel drained. It also gives you clarity and insight when you need some order around you, but also about your own flaws. It is an honest stone which also gives you awareness and alertness to your feelings and sexuality.